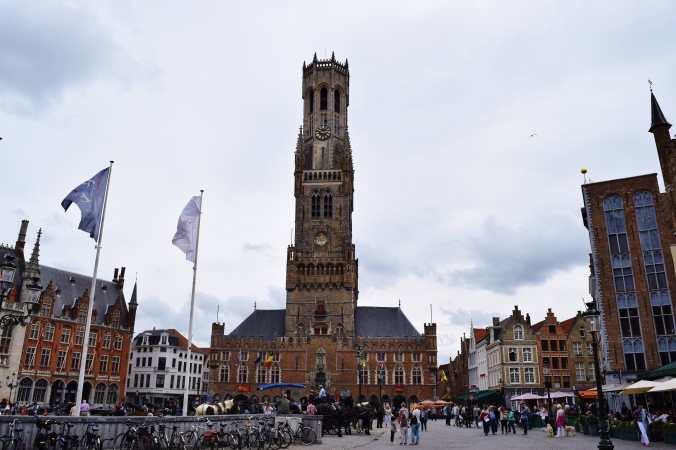 As I currently sit in the Mark’t, the central square in Bruges, I feel as though I have been transported back in time to a magical age before the invent of modern technology. It is as though time has not taken its toll on the beautiful, ancient buildings; it remains an oasis in a desert of evolving technology and change. Even as I look upon the buildings in person, and also after I climbed the ever ascending, winding staircase to the top of the Belfry, I had the sense that what I was experiencing was not real, how could it be? Those who refer to Bruges as a fairy tale city are exactly right. It’s difficult to believe such a beautiful, old, quaint, yet vibrant city still exists in today’s society.
My friends and I took a weekend trip to Belgium, spending two nights in Brussels and one night in Bruges. We started in Brussels, and naturally our first stop was a waffle shop. I don’t think I’ve ever eaten a waffle so quickly, at least not until I had my second one 15 minutes later (it was practically a heart attack on a plate – a waffle topped with a pile of whipped cream, strawberries and sugar). We wandered the streets and wound up in my favorite spot in Brussels, Grand Place, the central square (Yes, you caught me, I have a thing for old city squares). Over two days it would be safe to say that I was in the square 10 or more times, I could not get enough of it, it was so beautiful. Sitting outside at a restaurant on the square and drinking a liter of Blaunche de Bruges was one of the highlights of Brussels for me.

The nightlife in Brussels was such a great time due to the fact that everyone was so nice and they genuinely wanted to talk and get to know us. We went to a bar called Delirium that has more than 2000 beers available for purchase, which is just such an overwhelming amount of beer (I wasn’t complaining). We ended up meeting people from all over the world and taught them American drinking games like thumper and cheers governor (they loved them and never wanted to stop).
The second night we went to a sports bar to watch soccer games that were a part of the Europa tournament. It was the most insane bar experience I’ve had. There were people from all different countries standing on chairs screaming for their countries (especially the Irish, classic) and drinking copious amounts of beer. Everyone was getting incredibly rowdy but the best part was that overall, people were extremely respectful of each other even though they were all passionate about their teams with several beers under their belts. It was an awesome and unforgettable experience to have. 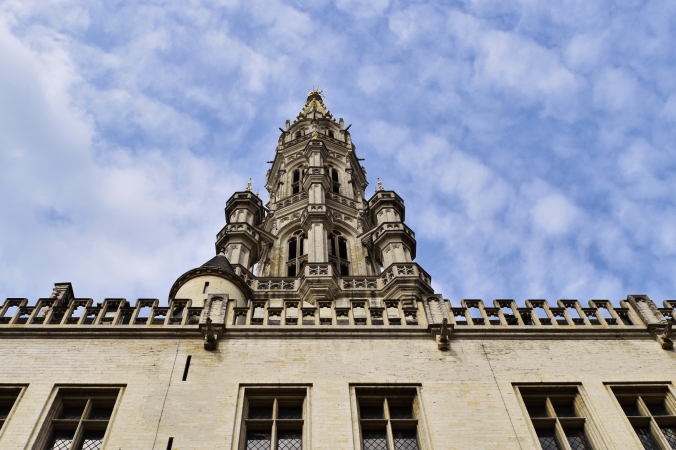 It’s hard to talk about Belgium without talking about the chocolate, waffles, fries, beer or mussels, so let me just tell you they are all insanely good! I don’t know how one small place has so many incredible, unique staples. Also, all of those are heavy, seemingly fatty foods but I don’t think I saw one overweight Belgian in my entire three days in Belgium. Pretty remarkable if you think about it!

Now to my favorite part: Bruges. I had to start the post with a blurb about Bruges because I fell in love with it in just one night. It really is magical and charming, and the people we met were so unbelievably nice. After a full day of walking around and getting a feel for the city, we met up with a couple of locals, Rien and Maren. Rin (my partner in crime, and not to be confused with Rien) arranged for me to meet up with them because Maren is her sister’s friend from college. They were so incredibly friendly and nice, and they have such a romantic story of how they met. Briefly, Maren, an American, studied abroad and met Rien, a Belgian, they started dating and she eventually just moved to Bruges to be with him. Wild, right? They showed us around to some of their favorite bars and ended up inviting us back to their house for some beers and stimulating conversation. It couldn’t have been a better evening (Thanks Rin, you’re the best. And of course thank you Rien and Maren!).
If there is anything I know for certain, it’s that Bruges will be seeing me again.